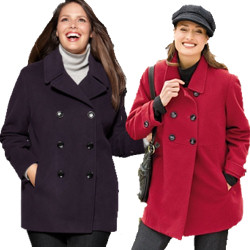 Plus Size Pea Coats are a fashionable way to stay warm.

What is a Pea Coat?

The style was originally worn by European Sailors in the 18th century.  Traditionally they were double breasted navy blue wool with wide lapels.  They are also called Pea Jackets and Pilot Jackets.  They are shorter coats.    It has been a popular style for many years and now is available in a variety of different colors, fabrics and style interpretations.

Pea Coats tend to be more casual and are shorter - they look great with jeans and pants.  If you don't want the bulk of a long coat, check out a pea coat.

What exactly is a plus size pea coat? Generally a pea coat looks a bit like a pilot jacket. The traditional color was navy because it was originally worn by American Sailors.

Picture a coat that has metal or wooden buttons, broad lapels, a double-breasted construction and slash pockets – and you've got the traditional image of a pea coat that appeared in fashion as early as the 1700s. 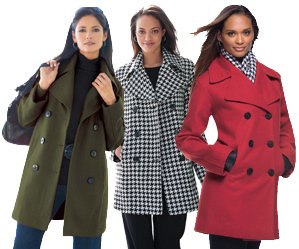 Most pea coats hang to a person's waist. There are, however, some that go down to a person's thighs. These are called bridge coats because they were for offices wear only. The basic cut and characteristics of the coat remain the same.

In modern society a pea coat remains very traditional with two exceptions. Some have begun adding hoods for convenience and warmth, and replacing the buttons with zippers. This is a classic piece of clothing that will last for decades in your wardrobe. The best pea coats don't have padding and minimalized belts. The belting, however, works very well on plus size women to provide more of the coveted hourglass shape. 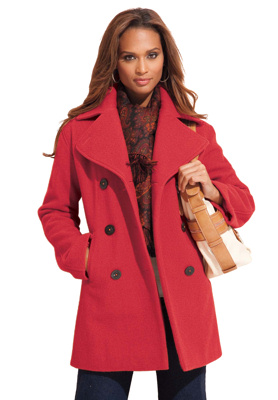 Shopping For Plus Size Pea Coats

In choosing your coat, the mantra of neutral colors remains very good advice. This makes a very classy jacket that you can wear into nearly every situation. If you decide to move out of black, white, gray and brown make sure to stick with darker hues that will more easily blend with the rest of your outfits. In terms of fabric wool is a big winner popularly, usually with some type of lining to avoid itching. Some designers have moved into other fabrics though for a high-end look including velvet and cashmere.

Thanks to numerous designers jumping on the plus size trends, you will never have to wear a dull coat that looks like a sack again. The versatility of the plus size pea coat will make you very happy for years to come. You can go to the park or out on the town and always look suitably dressed in terms of outer garments.

The neat thing about the buttons on a pea coat is that they naturally create the illusion of more length. Why? Because they're vertically aligned, which naturally makes an admirer look up and down. That vertical line is a great helpmate.

Well-made plus size pea coats will last a very long time if you treat them kindly. Many people end up passing them down generational lines because of their timeless appeal.

Avenue has a fun selection of trendier style coats and jackets in sizes 14 to 32.

Macy's always has a wonderful selection of upscale trendy plus size clothes including coats and jackets. Some of their designers and brand names include: Ralph Lauren, Calvin Klein, Baby Phat, Jones New York, Michael Kors, Evan Picone and Donna Ricco.

Torrid has a young and trendy selection of plus size outerwear.

QVC has become a leader in women's coats and jackets with a wide range of styles and designers. All of their clothing is available in sizes up to 3X.

While Zappos is known more for shoes and handbags, they also have Trendy and Designer Plus Size Clothes, including coats and jackets.

Nordstrom has a great selection of upscale and designer plus size clothes in more classic styles.

Here are the current listings:

top of the page